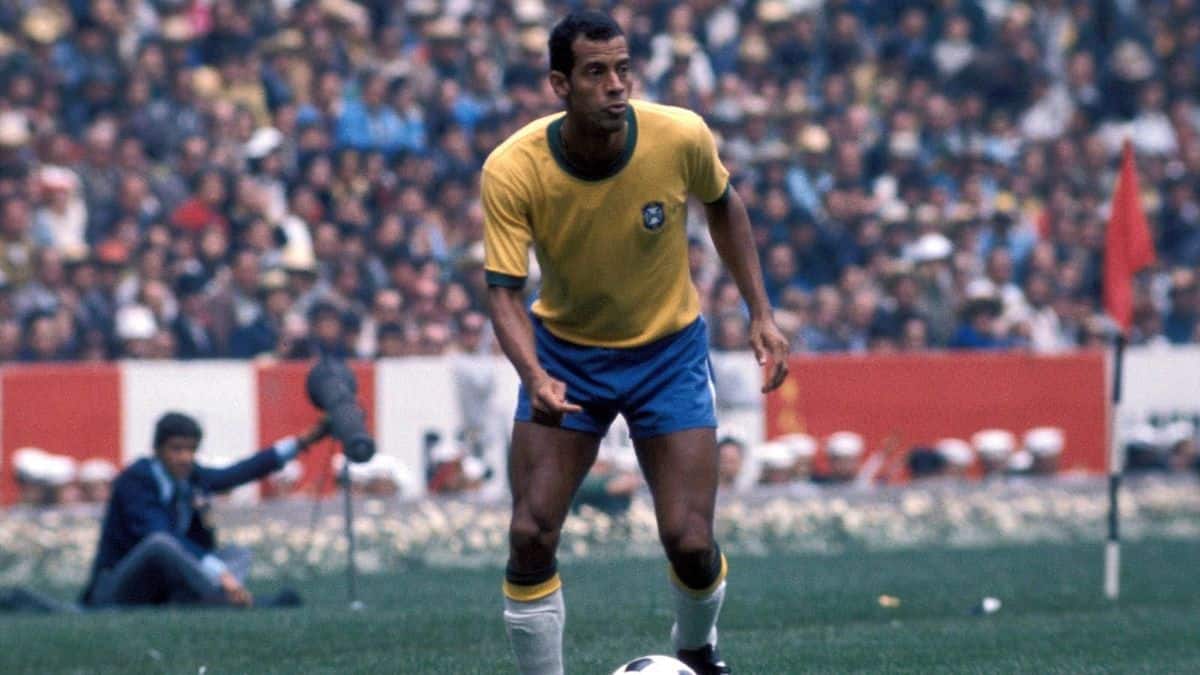 Carlos  Alberto was born on 17 July 1944, one of twin brothers. With his twin Carlos Roberto, brother Jose Luis and sister Maria Helena, he grew up in the old Rio suburb of Vila da Penha. ‘I came from a modest family; my father Francisco was a public employee in the city hall of Rio,’ he says. ‘But maybe it was good for me somehow because I had to learn by myself.’

His father knew that education was the key to a better life for his children. Francisco would come home from his office job, eat a meal then head back out into the Rio streets to spend the night as a taxi driver. ‘He made a big effort to earn a little more for us,’ says Carlos Alberto. He too was working by the age of fourteen, saving money each month to go to the local cinema in Vila da Penha. ‘I liked cowboy films,’ he smiles. Bright and diligent, Carlos Alberto shone at the junior Escola Grecia and then Colegio Souza Aguiar in Vila da Penha, before moving on to college at the local Educandario Santa Fatima.

All three of the Torres brothers played football. It was the bigger, faster, more physical Carlos Alberto who was spotted by coaches from Fluminense. He began playing as a juvenil, or junior, at the age of fifteen. The decision to play for the famous red, white and green stripes flew in the face of his passion for their arch-rivals, the red and blacks of Flamengo. His boyhood idols were Didi and Nilton Santos, the black rock at the heart of the national team’s World Cup defence. He still calls Santos, the bulwark in Sweden and Chile, ‘the biggest phenomenon in football history’.

Yet the money he earned playing twice a week for the juvenil side was simply too good to be missed. With his father’s encouragement, he had soon quit his job as an office boy and committed himself to football. ‘I earned as much as I did working the whole week in my other job.’

If Brazil’s raw materials were the finest in the world, it was its apprentice system that ensured its rough diamonds were polished into the most perfect of jewels. As a juvenil, Carlos Alberto trained with the professionals and had professional coaching. Vast crowds would watch even the preliminary games he played in. If a professional was injured he would be drafted in as temporary cover. When it came to the leap to the first team he was ready. By the time he was eighteen Carlos Alberto had established himself as the right-back in the Fluminense first team. He had been drafted into the Brazilian national squad before his twentieth birthday.

Carlos Alberto made his international debut marking Bobby Charlton at the Maracana^· during the 1964 Nations Cup between Brazil, England, Portugal and Argentina. The familiarity of the ground and the crowd helped him subdue both his nerves and a Charlton at the peak of his powers. Brazil won the game at a canter, 5–1. ‘I felt calm and I played very well,’ he says quietly. He would come across Charlton many times in the course of his subsequent life. ‘A great man, a great man.’

Carlos Alberto remained a fixture in Feola’s team all the way through to 1966. By then he had become the most expensive footballer in Brazilian history. Shortly after leading Fluminense to the Carioca championship in 1965, he was transferred to Santos for the then unheard-of sum of 200,000 cruzeiros.

His pride was soon to be dented. As Feola announced his 22-man squad for England, Carlos Alberto was overlooked in favour of the older, more experienced Djalma Santos. To add insult to injury, Fidelis of Bangu was preferred as the reserve right-back. For all the glory he would go on to, Carlos Alberto still feels the rejection. ‘There was no explanation. To this day I don’t know why,’ he says, shaking his head.

Despite this, Santos spotted his natural leadership qualities when the great Zito retired. ‘I have always had that personality of talking in the game, calling the attention of my team-mates, giving advice,’ he says. ‘That is my spirit. Zito stopped playing in 1967 and I was selected captain of Santos.’ As Brazil rebuilt in the aftermath of 1966, he seemed the most obvious candidate for the captaincy there too.

If there were politics involved in his acquisition of the black armband of Brazil he is politically savvy enough to have conveniently forgotten them. ‘Since Santos was considered the best team in Brazil and the world at the time, maybe they thought there was nothing more fair than if I was the captain of the Brazilian team,’ he says with a diplomatic shrug. Whatever the reasoning, Carlos Alberto quickly grew into the finest leader Brazil has ever possessed.

The first test of that leadership came in the chaotic aftermath of the Saldanha affair. Carlos Alberto had found little to fault under Saldanha’s management, hardly surprising since he had built his early sides almost entirely around Santos players. At one stage in 1969 the captain led an all-Santos back five including goalkeeper Claudio, Djalma Dias, Joel and Hilton. With Pelé and Edu the Santos contingent reached seven. As Saldanha’s confidence disintegrated, however, the captain could not condone his treatment of his friend and clubmate Pelé.

Since his arrival at Santos, his friendship with Pelé had been deep. ‘We lived in the same building. I have always had good relations with him, we are still friends now,’ he says. When Saldanha began suggesting that Pelé’s eyesight was defective and he should be dropped, Carlos Alberto sensed that panic had overtaken the manager. ‘I have never seen anyone who had anything against Pelé as a person,’ he says simply.

Carlos Alberto’s position is as unequivocal today as it was then. ‘Pelé was the player in whom we trusted,’ he says, still bemused to be asked whether the team could have prospered without him. ‘If Pelé is with us, we are with God.’ He does not know the whole truth, but suspects Saldanha had simply become scared of the pressure. ‘We knew that we had to win and the team had not settled. Maybe he feared losing the Cup?’ he says, throwing his arms up. ‘I don’t know.’

Wherever the truth rests, Carlos Alberto’s importance to the Brazilian cause only deepened in the weeks after their maverick manager’s departure. On 26 March 1970, in the second of Zagalo’s matches against Chile, he wielded his inspirational leadership on the field. By now the instability in the dressing room was affecting some players’ performances. As Brazil once more failed to gel, Jairzinho and Roberto were ordered off following a mass brawl with Laube and Silva. The match was held up for twelve minutes as officials separated the players. It was Carlos Alberto who calmed the side’s nerves, equalizing Castro’s eighteenth-minute goal himself early in the second half.

In the weeks leading up to the departure for Mexico his influence was at its most profound off the pitch. After the frenetic Saldanha, Zagalo’s reserved manner left the players frustrated and confused. Following a dismal 3–1 win over a local, ‘Mineiro’ selection in Belo Horizonte, Minas Gerais, and another goalless draw, this time at the Morumbi in Sa^·o Paulo against World Cup finalists Bulgaria, there was an unmistakable whiff of mutiny in the air.

With Pelé and Gérson, Carlos Alberto formed the team’s holy trinity. On the night of Tuesday, 28 April, in Pelé’s room at the Hotel Paineiras in Rio, they held an hour-long meeting that effectively moulded the course of events over the next two months. The cobras gathered with the boos of the 70,000 Morumbi crowd still reverberating inside their heads. With Zagalo seemingly unwilling to share his thoughts on specific tactics, they chose the team and the pattern they wanted to take on to the pitch for their final match before leaving Brazil, against Austria at the Maracana^· the following night.

As the most directly affected, another three players, Tostao, Rivellino and Clodoaldo were later called into Pelé’s quarters. Dario’s failure against Bulgaria had proved once and for all that there was no place for an out-and-out centre-forward in games against tight European defences. Tosta^·o agreed with the cobras’ idea that he play at inside left with Pelé taking a position slightly forward of him in the middle. Rivellino would adapt to a dual role as a covering midfielder whilst attacking on both wings. The young Clodoaldo agreed to patrol the rear of the midfield.

Afterwards the trio had a meeting with Zagalo who, in turn consented to let them try their formation. He told them he would watch from the stands where he would reserve the right to change tactics via radio conversations with Mario Americo. Félix had been told of his reinstatement over Ado and Leao in goal the previous night. It was only in the dressing room on the following evening that the remainder of the team were made aware of the changes. Piazza, brought in for Joel, was told he would be playing as a fourth defender only minutes before he took the pitch. A fired-up Gérson gave the final pep talk.

Rivellino scored the winner in a 1–0 win. Far more importantly, however, the side rediscovered the shape and fluency it had lost since Saldanha’s departure. Of the team that played that night, only Rogério, substituted for his great rival in the right wing position, Jairzinho, would not make it all the way to the finals in Mexico.

As far as Carlos Alberto was concerned, after that the key to Mexico lay with the stopwatches and slide-rules of Coutinho and his Cooper Tests. ‘Even if Zagalo had not taken over the team, even if we had Saldanha or any other coach, we had the team. We were not arrogant about it, but we were confident that if we were really well prepared physically we could win the World Cup.’

Hear Carlos Alberto talk about his goal against Italy in the 1970 Final.