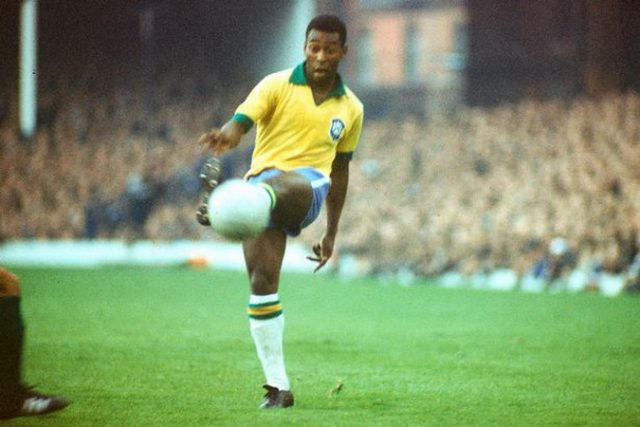 The Best Of Pele

Pele: The Boy With Three Hearts

Of course if it had been up to his mother, Dona Celeste, her first-born son would have remained known as Dico, the first nickname given him by his family. As the wife of a failed footballer, Dico’s mother rated her son’s greatest passion somewhere beneath ‘bank robbery and the seven deadly sins’. Pelé was a name he picked up playing football and she didn’t want the stupid game ruining her son’s as well as her husband’s life.
Dona Celeste had given birth to Edson on 23 October 1940, in the town of Três Coraçoes (Three Hearts) in Minas Gerais. He was the first of the five children she would go on to have with her husband Joao Ramos de Nascimento.

On the streets of Três Coraçoes everyone knew Joao as Dondinho, the undoubted star of the town’s football team. Dondinho clung to the Micawberish belief that he only needed a stroke of luck to lift his family from poverty and into a life of luxury at one of the big city clubs in Rio, Sao Paulo or Belo Horizonte. His big break duly arrived when he was spotted by a scout for Atletico Mineiro, in Belo Horizonte. But during his first match for the club, against Sao Cristavao in Rio, he collided with the giant Augusto, later to captain Brazil in the 1950 World Cup. Dondinho fell so awkwardly and violently he was left with severely torn knee ligaments. The team doctors told him he would never play properly again. Atletico Mineiro paid for his return ticket to Três Coraçoes and his dream was over.

Dondinho continued to play football in Três Coraçoes, packing his knee with ice between games to avoid being permanently crippled. As his son said later, ‘It was the only way he knew of making money’. It was only when he was offered a place with FC Bauru in the state of Sao Paulo – and a public service job to go with it – that Dona Celeste finally stopped moaning that he should forget the insanity that was football. The extra money he would earn from his proper job would finally allow the family a decent home.
If Dona Celeste had hoped for better for her son, she was sorely disappointed during his early childhood. Edson failed to shine at school in Bauru, a railway town, where the family settled on the Rua Rubes Arruda. Rather than doing homework he would earn money as a shoeshine boy or selling the discarded peanuts he picked up from passing trains. On the fields of the Noroeste Club at the end of the Rua Rubes Arruda he also discovered his ability to play football.

On the football pitch his father’s influence was obvious. His father in turn thought Pelé had inherited the spirit of his uncle, one of Dondinho’s brothers who had died young. In years to come, however, it would be obvious that Edson’s genius owed as much to his mother’s gifts. As well as Dona Celeste’s small, slight build and her beguiling smile, he had also inherited her fearsome, inner strength. ‘Anyone who made a judgement about Dona Celeste based either on her lovely smile or her petite figure was in for a surprise,’ he would say later in life. Like mother like son. Even at the age of ten he possessed a strength of mind, body and spirit everyone thought extraordinary.
By then those who did not call him Dico were calling him by the name he would turn into the most famous four-letter word in sport. Pelé has no idea where his name came from, despite his own efforts to retrace its history. It may have come from his mispronunciation of the name of one of Minas Gerais’ most famous players at the time, Bele. It may have been a half-Portuguese, half-Turkish concoction dreamed up by one of the many Turks who watched him play. All he recalls for certain is that as a nine-year-old he hated it so much he would get into fights with those who called him it. ‘I must have lost most of them because the name stuck,’ he is fond of saying.

By the age of ten he was playing with much older children in a neighbourhood team, named September 7. It was there he was spotted by the former Brazilian international, Valdemar de Brito. Edson was thirteen when Brito invited him to play for the junior team at the town’s other club, AC Bauru.

As an attacking midfielder with the Syrio Libanes club in Sao Paulo, de Brito had played in the 1934 World Cup side under Luiz Vinhais. Even by Brazil’s voluble standards he was a loud and opinionated coach, ‘a shouter’ according to Pelé. He had been told to keep away from the town’s older players because of his boorishness. He seems to have introduced discipline into Pelé’s game, however. ‘He kept on to us continually about our mistakes, and was very good for me and four or five of my friends,’ Pelé recalled. As it turned out, Pelé was to be very good for Valdemar de Brito too.

De Brito had been posted to a civil service job in Bauru but was tired of life away from the more vibrant political centre of Sao Paulo. He had been working on a way of persuading Sao Paulo’s Governor Janio Quadros to bring him back to the cauldron of the capital. As he watched Pelé develop he saw his train ticket back to Sao Paulo.

De Brito approached a friend, Athie Jorge Couri, a member of the state legislature who also happened to be president of Santos – a club with ambitions to break the stranglehold the upper-class clubs like Corinthians, Sao Paulo FC and Palmeiras had placed on the Sao Paulo regional championship and the Brazilian National Championship, the Silver Cup. He was soon restored to the thick of the action with a civil service job in the state government offices. He also benefited from an agent’s fee from his friend Couri.

Dona Celeste had been against Pelé’s move to Santos. She had seen his father sacrifice everything for football and emerge penniless. ‘To me you are still a little boy, but everyone else seems to think you’re grown up,’ she complained. Ultimately, however, she saw that football offered his only realistic chance of an escape from life in Bauru. ‘You were never a good student, and I don’t want you sewing boots for the rest of your life,’ she told him.
Pelé found the transformation frightening. On the training pitch he stood out immediately. He was put on a special high-fibre diet and told to build himself up in the juvenil and amadores sides. By day the encouragement of elder statesmen like Zito and Jair kept him going. As one of the club’s unofficial errand boys he was also given a new nickname, Gasolina. (‘Get me a coffee kid, and don’t spare the gasolina.’) But by night, alone in a room with two cots, Pelé cried himself to sleep. After five days at Santos’ he rose one morning at 5 a.m., packed his belongings and began creeping his way out of the Vila Belmiro. If the Santos odd-job man, Big Sabu, had not spotted him with his suitcase as he left the ground for the local market, Pelé’s career as a professional might have ended there and then.

Pelé made an immediate impact for Santos’ juvenil and amadores sides, scoring the crucial goals that gave them the state championship. Yet, despite the special diet and training he was given, he remained too small and slight to make his mark at senior level. A piece of the luck his father had waited for all his life changed everything, however. Pelé had been in the stands when Santos’ main striker, the stylish Vasconcelos, suffered a gruesome broken leg in a match against Sao Paulo. Pelé stepped into the No. 10 shirt at the age of sixteen. He scored his first goal against Corinthians of Santo Andre on 7 September 1956 and scored sixteen more in his next ten appearances. From then on he never stopped rewriting the history of football.